Back when I started playing Kingdom of Loathing (over a year ago), there was a plan in place to reset the entire game as soon as all of the bugs were worked out. This meant that any items, meat and accomplishments you had gained would all be lost. Over time this plan changed into Ascension, which means that you keep your stuff with limited access to it for 1000 turns and all your stats are reset to your starting numbers. So we waited, and waited, and waited until finally there was rumor that testing of the ascension code would begin in March. I assumed April 1st would be the glorious day, but it came and went with fun in-game events, but no word on ascension. Alas, we had to wait until June 8th for the chance to battle the Naughty Sorceress and see all of the cool new post-ascension content and get the chance to change our race.

I started out with six characters, but I let my Turtle Tamer atrophy and it has probably been deleted by now. Today I ascended my fourth character which is my Pastamancer, and it only leaves my Disco Bandit unascended. The new content is everything that was promised, with new challenges, jokes and items. You now get to pick an astrological sign and it affects an entire region of the map, including some of the quests that are required of you.
Posted by Sarah at 12:40 PM No comments:

Time off for Good Behavior

My birthday is on Wednesday, so I'm flying to Chicago tomorrow for a few days. I hope to hit some of the places I didn't get to in October, like the Field Museum, Adler Planetarium, Shedd Aquarium, the Smith Museum of Stained Glass Windows on Navy Pier and Lincoln Park Zoo.
Posted by Sarah at 1:18 AM No comments:

Some Scottish fisherman pulled a ten foot Yellow Submarine out of the ocean.
Posted by Sarah at 2:21 PM No comments:

"Becoming a certified emergency medical technician in Hennepin County, for example, requires only 142 hours of classroom, skills sessions and clinical time. Similarly, after a six-hour class, one can apply for a license to carry a concealed weapon."

But if you want to perform traditional African hair-braiding in Minnesota (which involves minimal scissors use and no chemicals) you must be licensed. Getting licensed costs nearly $15,000 in tuition and requires at least 1,550 hours (10 months) of schooling and forgone earnings. None of this training includes braiding either.

Luckily the Institute for Justice has filed suit on behalf of three local braiders to get the licensing requirement changed.
Posted by Sarah at 12:29 PM 1 comment:

Ride the light - to a dark place

Back in 2002, I had a problem with Qwest jerking me around about my DSL bill. I love to read things like this: How Jennifer Palmquist brought down the Roaming Empire.
Posted by Sarah at 10:34 PM No comments:

laugh to keep from crying

Guess what? You'll never guess, not in a million years! Go on, guess!

How the [bleep] did you know? No, Earthlink did not fix the problem, but the best part is that when I inquired about the escalation, it was mysteriously missing. One would never expect that, now would they? This time they put in a new wrinkle, "Due to a system issue, I will not be able to transfer the chat to a supervisor." Wow, that's a new one! Did you think one up just for me?

I was finally able to extract a "case number" and a promise that a Senior Technician will call me tomorrow evening. I got about 15 apologies, but I still doubt my phone's gonna ring anytime soon.
Posted by Sarah at 12:01 AM No comments:

I haven't slept for ten days, because that would be too long.
Posted by Sarah at 11:56 AM No comments:

Irate consumer below - feel free to skip if you don't want to hear ranting:

In March, with my shiny new computer, I got to choose six months of free dial-up access from either AOL or Earthlink. I've had AOL and not been impressed, so I picked Earthlink and I continue to be unimpressed. My problem with Earthlink is that I get randomly disconnected in the middle of surfing, sometimes after 30 seconds, sometimes after 90 minutes. I've gone through about 15 different remedies that they have suggested and nothing has worked. I started off emailing them, called once and finally started chat sessions. They keep asking me to do the same things and I have to tell them that I have already tried that. Finally towards the end of May, a rep tells me he will escalate the issue to his engineers. On June 2nd, I chat to inquire about the escalation and the rep tells me she will reescalate since it is still happening. Yesterday, after the 72 hours she told me to wait, I chat again to find out the status, at which point I am told that I need a ticket number, which was never given to me. She gives me another thing to try and says that will fix the problem (it didn't - big surprise). This evening, I chat for the seventh time to check on my problem and am told there was never any escalation put in. I ask for a supervisor who tells me he will escalate the issue. I ask him for the ticket number and he tells me "no ticket number is generated for these escalations"!

This is driving me insane, one "brush off" at a time. I have a number for Complaints (404-815-0770), which I will be using on Thursday - the day the supervisor assured me the problem would be resolved. The reason they offer you 6 months free is to get you to keep their service after your trial period. If this ISP is not even good enough for me to use when it is free, why would I pay for it?
Posted by Sarah at 10:44 PM No comments:

You have been chosen

Trailer for The Island
Posted by Sarah at 2:34 PM 2 comments:

FIREFLY (FOX) - The Sci Fi Channel has landed the repeat rights to all 15 hours of the short-lived FOX series (and basis of the upcoming "Serenity" feature film). The network's July schedule lists the series as joining its Friday lineup on July 22 at 7:00/6:00c where it will precede original episodes of "Stargate SG-1," "Stargate Atlantis" and "Battlestar Galactica."
Posted by Sarah at 2:28 PM No comments: 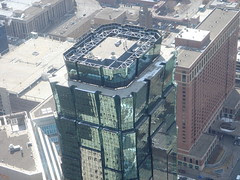 My building, the top seems so hollow.
Posted by Sarah at 9:58 AM 1 comment:

I have taken 42.8 percent of the classes I need, but only have 32.8 percent of the required credits, which means I will need to work much harder on the remaining 11 semesters of my college career.
Posted by Sarah at 7:32 PM No comments:

The Wisdom of the Wallflowers

God Don't Make Lonely Girls - I can't get the girl with the Spanish tears out of my mind
Letters from the Wasteland - May take two to tango, but boy it takes one to let go
Into The Mystic - I want to rock your gypsy soul
One Headlight - This place is always such a mess, Sometimes I think I´d like to watch it burn
Invisible City - Now all of these voices, And all of these noises, With all their illusions of choices
Closer To You - I’m sorry too, But don’t give up on me
Posted by Sarah at 4:55 PM 1 comment:

Kottke tells us to check out this page of optical illusions. I love how these dots appear to rotate both left and right.
Posted by Sarah at 12:27 PM No comments:

I couldn't pass up the chance to have literally tens of people read my words about geometry and quilting in the City Pages. No, it's not a terribly important issue and I even hesitate giving this guy any more publicity, but I had to say something about this obvious ploy for attention.
Posted by Sarah at 4:26 PM No comments: