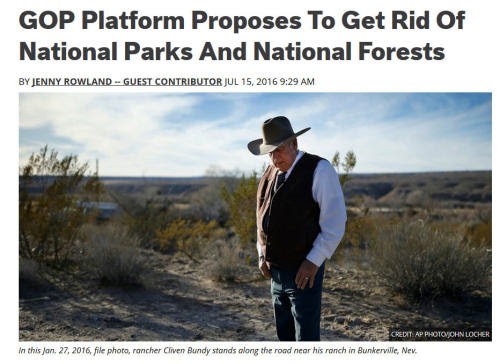 The Republican platform committee met this week to draft the document that defines the party’s official principles and policies. Along with provisions on pornography and LGBT “conversion therapy” is an amendment calling for the indiscriminate and immediate disposal of national public lands.

The inclusion of this provision in the Republican Party’s platform reflects the growing influence of and ideological alliance between several anti-park members of the GOP and anti-government extremists, led by Cliven Bundy, who dispute the federal government’s authority over national public lands.

“Congress shall immediately pass universal legislation providing a timely and orderly mechanism requiring the federal government to convey certain federally controlled public lands to the states,” reads the adopted language. “We call upon all national and state leaders and representatives to exert their utmost power and influence to urge the transfer of those lands identified.”

The provision calls for an immediate full-scale disposal of “certain” public lands, without defining which lands it would apply to, leaving national parks, wilderness areas, wildlife refuges, and national forests apparently up for grabs and vulnerable to development, privatization, or transfer to state ownership.

You do realize that “certain” federally controlled public lands would also include Native American reservations. Here’s an excerpt from the Department of the Interior about this:

In the United States there are three types of reserved federal lands:  military, public, and Indian.  A federal Indian reservation is an area of land reserved for a tribe or tribes under treaty or other agreement with the United States, executive order, or federal statute or administrative action as permanent tribal homelands, and where the federal government holds title to the land in trust on behalf of the tribe.

Approximately 56.2 million acres are held in trust by the United States for various Indian tribes and individuals.  There are approximately 326 Indian land areas in the U.S. administered as federal Indian reservations (i.e., reservations, pueblos, rancherias, missions, villages, communities, etc.).  The largest is the 16 million-acre Navajo Nation Reservation located in Arizona, New Mexico, and Utah.  The smallest is a 1.32-acre parcel in California where the Pit River Tribe’s cemetery is located.  Many of the smaller reservations are less than 1,000 acres.

Some reservations are the remnants of a tribe’s original land base.  Others were created by the federal government for the resettling of Indian people forcibly relocated from their homelands.  Not every federally recognized tribe has a reservation.  Federal Indian reservations are generally exempt from state jurisdiction, including taxation, except when Congress specifically authorizes such jurisdiction.

It’s all well and good to claim that the GOP are trying to destroy the environment. But they are also after the few lands left in control of the Native American peoples. This would give them the authority to put oil pipelines through sacred tribal sites and continue the systematic desecration of the native cultures. And we KNOW this is what they want to do. And not just in the midwest, all over the country through a bunch of different reservations. Have some links about that (x, x, x)

This isn’t just about the environment. This is racism and greed and the continued destruction of the native peoples’ lives and cultures.